Reflexes exist to keep us safe. Essentially, they are nervous system reactions caused by physical stimulation of the body’s receptors. These responses occur without conscious control.

As an example, you quickly withdraw your hand if you accidentally touch a hot or sharp object. This is an automatic reaction to protect your hand from damage. You don’t think about it. It just happens. You will want to keep this reflex working!

The reflex that produces saliva when eating makes swallowing and digestion easier. You will want to keep that one too! Many other automatic functions in the body are essential, such as maintaining blood sugar levels and digesting food. We need them throughout life for survival.

In contrast, the primitive baby reflexes, usually referred to as Infant Reflexes are required to:

In a newborn, they:

The Infant reflexes are not needed in later childhood and adulthood and their persistence can hinder the child’s brain development and can be a major contributor to physical, intellectual, emotional, behavioural and social problems. In children with Developmental Delay these persisting reflexes have a wide range of effects.

What are Primitive Infant Reflexes

These are reflexes relating to the very early stage of human development and are in-born, most developing in utero. The baby doesn’t learn these reflexes. They should develop naturally during the pregnancy. An example is the grasp reaction of a baby. This Robinson Grasp Reflex is triggered by specific touch on the baby’s hands.

Most Infant Reflexes are present before birth and the earliest one, The Fear Paralysis Reflex, develops at 5 to 8 weeks of pregnancy. Most mums-to-be don’t even know they are pregnant at this stage. Many infant reflexes assist in the birth process, most are protective and some are present to establish bodily functions necessary for survival.

For example, the two Spinal Infant Reflexes, Spinal Pereze and Spinal Galant, are stimulated by touch to the back. During the birth process they help the baby wriggle down the birth canal during contractions and also empty the baby’s bladder to rid the body of waste.

This automatic response assists the birth and promotes normal functioning of the baby’s bladder and bowel. Having served their purpose during the natural birth and in early life, the reflexes are no longer required and they become progressively inactivated by a process of maturation leading to reflex integration.

However, if these Spinal Infant Reflexes are not stimulated during birth and subsequently inactivated, they can result in later difficulties, for example with attention, sitting still and/or bedwetting, soiling and other far-reaching problems.

Such difficulties may be related to birth by Caesarian section (in which the baby does not experience passage down the birth canal), a breech birth (which provides stimulation in reverse), or a fast last-stage or assisted birth (ventouse or forceps) that may not provide the time or stimulus for the natural processes to complete.

This is just one example of how the incomplete maturation of Infant Reflexes can affect the older child in many ways. If this Infant Reflex Integration process is incomplete, the functioning of the brain can be affected. The Central Nervous System (CNS) may then be unable to function efficiently in various ways, potentially influencing the whole child, physically, socially, emotionally, behaviourally and/or intellectually, depending on the nature and extent of non-integration.

There are twelve Infant Reflexes addressed by the Brainchild Individualised Program. We refer to these as the KEY INFANT REFLEXES.

Although each reflex has particular influences on physical, emotional, social and educational areas, their combination can multiply the effects. A complex reflex profile can produce wide ranging difficulties.

Children with cerebral palsy or other difficulties involving gait (walking) may benefit from working on the integration of additional infant reflexes beyond the twelve key ones. These can be accessed at The Brainchild Centre.

As early as the 5th week of pregnancy, the first infant reflex develops to protect your baby. Throughout the pregnancy your baby continues to develop further reflexes that will influence the position during the pregnancy, help the birth process and support survival, starting with taking the first breath.However, in some cases, these reflexes may not emerge.

Your baby assists in the birth process with automatic pushing, turning and wriggling movements that aid progress towards the outside world. These movements are generated by particular automatic inborn infant reflexes. They help to position the baby and enable the birth to progress through the different stages.

As mentioned above, these reflexes are progressively integrated following a natural birth, but this process may not occur when the progress down the birth canal is missing ( C-section) or modified (assisted by forceps or ventouse) or a fast birth .

This is the period of time when most of the infant reflexes integrate. This means that the reflexes become less dominant and are progressively replaced by conscious movements.

During the first year of life, babies would naturally lie flat on their tummies as well as their backs and move freely. 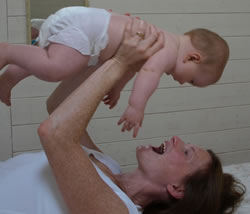 They need to be held, moving with the adult, developing sensory skills relating to touch, balance and proprioception, as well as emotional attachment. They also need to move freely, lying flat for sufficient time, until they are able to sit themselves up. There are many intermediate developmental movements to learn on the way from lying to standing! Practice and repetition of these is an important factor in developing the learning pathways in the brain. As babies experience their environment in this way, at their own pace, they are able to make the movements that help the infant reflexes to be replaced by conscious control.

Often, this is not fully achieved and problems emerge. This may occur, for example, through inactivity in a fixed position, such as long periods spent in inclined seats, rather than lying and moving freely on a horizontal surface.

The integration stages of several Infant Reflexes rely on the baby being held and moved in relation to gravity, lying prone (on the front) and horizontally with freedom to move. Government guidelines issued in the UK and USA regarding the sleeping position of babies have encouraged parents to sleep babies on their backs. However, it is important that babies also spend time on their fronts.

Most postural reflexes are life-long and are necessary for controlled, co-ordinated, fluid movement in response to gravity and the maintenance of balance. In typical development they are in place by 3-4 years, with some variation.

One example of a postural reflex is the head-righting reflex. As the body moves one way the head is automatically held in an upright position to maintain balance. This begins to develop as the baby lies prone at approximately 16 weeks, lifting the head, so that the face is in a vertical position.

There are many children who find learning difficult, or have difficulty concentrating, comprehending, making friends, being motivated or being still.

For example, one child may have problems sitting still in relation to specific reflexes. They may also dislike labels on clothing, tight belts and have difficulties with urine control. Another may show aggression, fear or low self esteem relating to a different reflex. Yet another may have problems with balance and co -ordination or have difficulties with communication.

The involvement of a group of reflexes may present as a more complex difficulty with varying severity. A child in this situation may be struggling at a low level with many aspects of life or may have been given a diagnosis such as Autistic Spectrum Disorder, ADHD, Dyslexia, Dyspraxia, language or behavioural difficulties. All the behaviours associated with these labels arise from the way in which the brain functions.

The BrainChild Developmental Program concentrates on the reflexes and behaviours that the child is exhibiting rather than a diagnostic label. The program works at the foundation level of brain functioning, using specific sets of movements to make enduring changes to the child’s functioning.

Go to The Checklist    to see if your child may have developmental difficulties and could be helped by Brainchild.