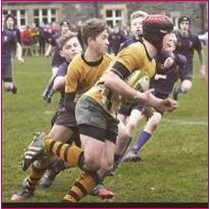 The impact of a BrainChild program often shows in physical improvements first. Running, for example.

B arrived at BrainChild, age 15,  a promising rugby player, but with a limiting running style. The main concern was with his worrying academic progress. He worked hard to improve.

An early email from his mother included this picture.

B on Saturday 28 March at the final of the Junior House Rugby Tournament – which his team won by too many tries!

He emailed this picture to me himself as he was particularly pleased with his running style.   His weight is totally forward and he looks like an athlete.

Previous to this his running style was almost laborious. His body was tilted backwards, with his chest out and he put the heel of his foot down first, followed by the front.

We will get a report on his academic progress at the end of term.

A later email after the completion of his program: 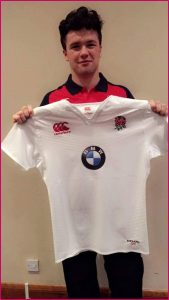 Just thought I would drop you a line as this is GCSE results day.

B worked hard and gained GSCE in all major subjects English, Maths, Sciences as well as PE.

I have also attached a picture of him taken recently.

The picture was taken when he was selected for the England Under 16 rugby team.  He was presented with his first English shirt and cap.

That’s not the end of the success story. If you are a rugby fan you may be able to guess who he is!!