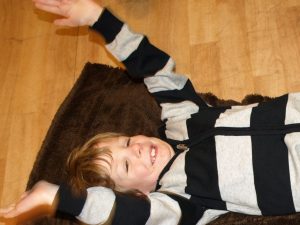 ‘He has improved in all areas’ says his Dad.

This is a true story about a boy aged 7 years old diagnosed with Cerebral Palsy and Learning Difficulties who has benefited from Brainchild.

He spent the first year of his life in hospital on a ventilator and parents were constantly being told that he would not survive. Each time he recovered he would become severely ill again. This included infections in the bowel, septicemia, fits, turning blue, uncontrollable fast heart rate and brain bleed, alongside constant problems with breathing and more.

For this first year, he was intubated and lying on his back the majority of the time with limited physical contact and stimulation. His parents cuddled him as much as they could. By one year he was smiling and responding. (He is a delight!)

Just a few of the changes since Brainchild: