No diagnosis. Many issues. 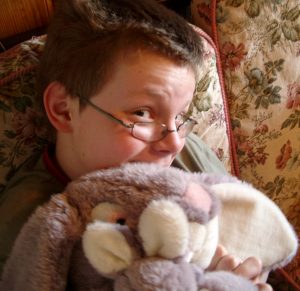 He hated writing and would do anything (anything!) to avoid having to do any.

M was almost 11 years old when he began BrainChild.

He was a very clumsy child with poor fine motor control. He hated writing and would do anything (anything!) to avoid having to do any. What he did produce was almost illegible and had very poor spelling: this was despite him being an avid and above average reader

M struggled with socialisation with his peers; acting often like a much younger child, misunderstanding and misinterpreting normal interactions.  Letting stress build up,  he would feel trapped and lash out. (He would ‘lose it’ with quite violent episodes of which he had no memory.) A bad reaction to being told off left him feeling that he was being ‘got at’, even if the adult had felt he had only been gently steered rather than in deep trouble.

M seemed over-sensitive to certain noises and smells. He hated eating at the same time as his Dad because of the noise of his chewing (imperceptible to anyone else). Also, he unable to concentrate or was distracted if there was external noise during a conversation/ lesson e.g. grass cutting or a radio on nearby.

M was disorganised and lost things. Getting ready for school was an ordeal as the daily hunt for shoes etc took place, often making him late. He fiddled constantly and would often break thing unintentionally. However, this fiddling seemed to help him concentrate.

M was not a particularly happy boy. He loved school because of the learning on offer, but hated non-lesson time as he was bullied. He felt that he was not a popular person and that many people disliked him.

The main reason for starting BrainChild was M’s problems with writing, although his socialisation problems were also an issue. Also he was about to start secondary school and we felt that some of these things would worsen due to the demands made on him by the changing environment.

In addition we were interested in the assessment part of the process for some kind of independent monitor of M’s difficulties. We felt this would be useful to present to his new teachers to explain M’s behaviours (and possibly how to deal with them).

The initial assessment was very helpful. It showed his areas of weakness clearly. Also Viv’s interpretation was like that of a visionary! She was asking us if M did things due to a certain non-integration that we hadn’t even thought to tell her about!

We liked the group

The group nature of the program was very good for M. It was good for his self-esteem to realise that there were other children just like him and that they might be struggling with similar things. He found this reassuring and felt less like a freak.
The group sessions were also a motivator (for him and us) as everyone was good at some things and poor at others. It also made us do our ‘homework’, or rather ‘Homegames’.

I am particularly impressed by the change in M’s writing. He now volunteers to write things and can make things quite presentable when he has time. I didn’t expect quite such a dramatic change.

The changes in his socialisation are great. Although he is clearly never going to be a great understander of other people he now has the skills to recognise when he is struggling. We are taking a group of his friends to the cinema tomorrow for his birthday- this seems quite miraculous.

All the changes in M seemed to happen quite quickly when he was doing the program – I had expected a much longer time before changes were apparent. That said – he has continued to develop and improve (despite the obvious drawbacks of being a teenager!). Yes, despite the mad teenage moments (battles over haircuts etc) he is marvelously improved. Lucky really – as he is now taller than me and has Nick’s build!

For M – doing the program has been amazing. He has improved in so many areas of his life and he appreciates the difference. Because of this he is much happier. Also when he is struggling he is comforted by his knowledge of the others he knows are like him and this is his specialness. He can understand that he is gifted in other ways. I would do the program again if we were back in the same situation – but the pre-BrainChild M seems like a very distant memory.

It seems amazing to me how many children there are who are struggling with some of the “Asperger type” problems. Poor socialisation is ruining the careers of a lot of children as they cope so badly with school. So keep up the good work.
Best wishes
Gillian

GCSEs were last summer and he did reasonably well even some As! Crucially passed English (actually lowest grade was D in Art) Now in 6th form doing maths, further maths, physics and chemistry. First modules were very good A, B and 2 Cs! Not bad.

Socially blooming too – seems to be coming into his own as an older teen – has friends and buys birthday presents (on time!)

We left him at home last week on his own whilst Lucy went off to camp and we went to London. Got up, ate, revised and may even have washed himself!

Hope life is good for you
Best wishes