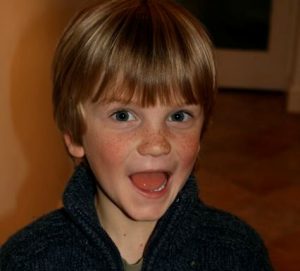 Immediately following his participation in a Brainchild group, Joan Hunt, the autism specialist, saw him after one year.

He is able to communicate better.

Understanding and following instructions more easily. It’s much better. When we used to ask him to do things he was just blank. Not now. If he doesn’t understand immediately he will ask, “What do you mean?” His language is developing well. He has a good vocabulary. He is listening better at home, even when he is excited. At parents’ evening they reported that he is listening better and for longer.

He has developed a great sense of humour

His speech is clearer. He is able to recall and express learned information now. He expresses his desire to be independent. He is proud of his achievements. He is aware of them! His reasoning has improved – he can understand cause and effect now.

He is less self isolated.

He rarely walks about telling himself stories and will run up to someone saying, “I’m here!” He plays with others more. His general behaviour around other people is now appropriate. We notice that he looks the same as everyone else at football sessions.

He is definitely more able to read other people’s body language and expressions. Before the Brainchild Program, if he was doing something wrong he wouldn’t notice my expression. Now he asks “Are you angry mum?” His inappropriate closeness to people is a lot better but he still enjoys being close to us. He is wanting to do more things. He asked to learn how to cook. He would never have asked anything like that. His interest and perseverance in everything has increased.

His reading has taken a huge step and his numeracy is doing well and his handwriting is easier and neater with no more immature writing. His teacher reports that he is a joy to teach – he wants to learn.

He can now ride a bike without stabilizers and turn corners too. He is a star! He has started to play and enjoy Football and he can now run really well and fast. It is more coordinated and fluid.

He gets himself dressed completely on his own. He is proud that he can do it. He says: