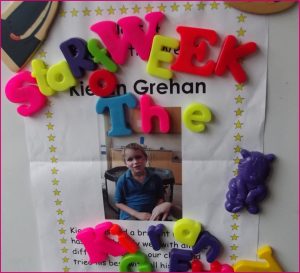 K was 6 years old when he first came to see me. He used a few words. All nouns. Not always identifiable.

BUS was his favourite.

This was only one area of concern. There were many others.

His diagnosis was ASD with learning difficulties.

As we worked through his program his mum sent feedback via email.

This area continues to improve and K is doing really well with his verbal and non-verbal communication. We stopped keeping track of his individual words some months ago and he has also lost many of his made up words, some of which were very quirky!

His receptive language appears to be very good as well.

He will often “joke” and ask for unusual things such as the “cinema” or “party” but he knows and understands what is and what is not possible, especially when its dark! There is a lot to catch up on still but he is making good and steady progress and he seems to enjoy using his voice which is fantastic!

The next email reported:

Communication continues to go from strength to strength. K is doing really well with his verbal and non-verbal communication. He is now rarely frustrated by not being able to communicate.

There is a long way to go still, especially around spontaneous communication but he has really come such a long way in the last year. He continues to enjoy singing and has a couple of nice party pieces which he is happy to share with friends and family members.

Less than one year from the start he was reading to me, answering questions and telling me about the story. Social language was developing and he could initiate a simple interaction.

Just a few other email comments about his progress…..

He continues to progress.