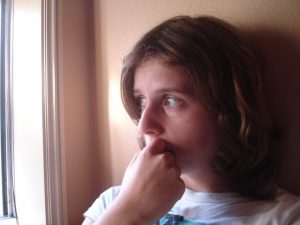 ‘Our relationship was not in a good place. Now the whole family is much happier. The changes in C have made a big difference to us all. C smiles a lot more now and I smile a lot more’ Mum

‘When C (aged 11) arrived for the initial assessment she refused to leave the car and lay curled up in ball. We agreed that she should stay there until she was ready. After about 40 mins, I went out with mum and C came inside with us. She spent much of the time clinging to mum, curled up and anxious. C understood instructions and complied (with persuasion and a bit of trickery!) She did gradually respond to my requests and answered me while looking at mum. Mum was pleased with her response at this stage.

After the BrainChild group program

At re-assessment, at the end of the group program, she cooperated and complied and smiled. She no longer needed to sit on her mom, curled up. C talked to me about her friendships at school and how she felt. She was used to me in the group sessions and had visited once before, but mum confirmed that the change in behaviour was typical of the change in her level of anxiety since starting the program.’ – Viv

An Aspergers statement application was in progress at the start of the Brainchild program.
Mum’s sister and Nana have dyslexia and Mum’s grandmother is a reclusive.

C was conceived via IVF using the early stages of a new method. The pregnancy was fine, it was a fast birth and the delivery caused a torn uterus. Mum briefly cuddled C after birth, but the baby was cold and taken away. Her mum was ill in hospital for three weeks. When at first they took the baby away, mum was disorientated.
C was breast-fed, didn’t sleep much, didn’t like to be alone and wanted to be in a papoose facing outwards. She needed to be nursed to sleep upright because she didn’t like lying down. There was early neck strength but no crawling. She sat and stood up and walked with no practice.

The following key issues were written by mum on the registration form for the Brainchild Group Program:

Mum and C took part in a Brainchild group program. She tells her story…..

When we first started doing the exercises, within the first week, I had four nights of unbroken sleep, which has never happened in 11 years. You don’t know what it means to get a few nights unbroken sleep. Last week she went to the local park on her own which is a huge milestone for her. She never goes out alone she is quite fearful of something happening to her. Although I talked with her on her mobile she was still out on her own. She has also been more tactile with me asking for kisses. Over the years I have become wary of kisses as she would spit in your face, but she hasn’t been doing it.

One day when we had finished talking I asked her if she wanted a cuddle, she said she did not need one but she would give me one if I wanted one. Which I felt that again is a huge step for her to understand that I would get something out of a cuddle!

Communication has improved. It is much better. She doesn’t get frustrated like she used to. She has also started to be a bit more talkative to adults, just a little bit, if I am there and prompt her. She talks about things now instead of saying a couple of words then hitting and running away. I feel as though these are huge mile stones for C to accomplish in such a short time of doing the activities.
You can have a better conversation with her now. She won’t just go on about what she wants to. I can ask her to give me five minutes to speak to her and she will listen. Before she didn’t listen to me and she just continued talking.This is a very big communication issue.

She will say to me now, “I’m losing it a bit mum – can you squeeze me” She will help herself, using tapping or the hedgehog. Being more self-aware, she will ask mum to do sensory therapy.
She is better in transition, is not so shy, and no longer asks not to be left with strangers or left alone. She would not do anything or go anywhere alone when she started the program.

There are improvements in being socially isolated and withdrawn.
She is not inappropriately touchy/ feely now and doesn’t invade personal space.
Her range of facial expression is greater. She’s calmer, happier- she smiles and laughs more.

Self organization is better. There are less problems with school. She tidies and organizes her bag each night and is more self-directed.

Two years later, C volunteered to talk to a group of adults she did not know about the Brainchild Program. She was calm and clear and expressed that she couldn’t believe how she had behaved earlier. It was as if that person was a distant shadow. This was the girl who refused to speak to adults.