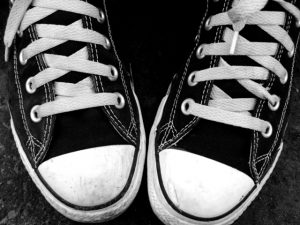 ‘No! Not the buttons! Not my gumdrop buttons!’ (from Shrek)

I walk into our bedroom and catch both boys standing on our bed, my youngest helping J to do his school shirt button.

This is so great in two ways, one that my youngest is caring enough to help his brother and two because J is fine about not always being able to do things that his younger brother can. A full acceptance of who they are by them both – a glowing smug mum moment for me! Next minute they will be arguing and shouting at each other but it’s good to bask in the glory of these sweet moments.
My main point is that my eldest was accepting help from his younger brother and that his younger brother cared enough to help him. Without all the support I have received from school, close friends and Brainchild I think that my story would have been a very different one.

This is perfectly normal (and even healthy), as with everything with a child with extra needs, the situation is hugely exaggerated. Helping both my children to understand each other’s difficulties and praising my youngest for his understanding has been the route to success. Giving my youngest plenty of time away from his brother and his own personal space as well as encouraging his outside interests has been key to his and my own sanity.

Movements such as doing up buttons and tying shoelaces can be influenced by retained primitive reflexes. Working on integrating these can help enormously. J still needs work on his fine motor skills but he writes and attempts things he never could before. Yesterday he told me about a lesson where a few other children had got in trouble for fiddling with the smart board – he explained that he had used a finger exercise to stop himself! He showed me and it was one we had learned on our Brainchild course. Must get on with those games again!

For now its is still Buttons, Siblings and Fine Motor skills!