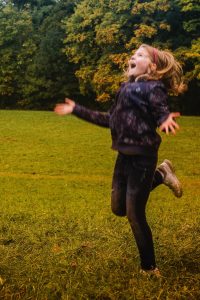 Well what can I say, the hard work has …and is ….continuing to pay off!

Lots of people are commenting on the difference in Faith and how she seems so much more happy and relaxed in herself.

She can have fun!

Last Saturday we went to the concert Faith was telling you about. Last time we went she enjoyed it, but was self-conscious and just sat watching.  There were also occasions last time where she struggled with others in the group and the mood lasted quite a while!

This time round she had times others got to her but it was over in seconds and she handled situations herself instead of taking out her frustrations on me. She let herself go, dancing, singing, screaming waving her glow stick like the other girls. It was lovely to see.

Last Tuesday and Wednesday she had her school show and was fantastic, confident, taking part, saying her lines clearly, head held high, acting her role as a saloon girl, she even asked myself, her grandma and my friend to go to the show, where in the past she hadn’t wanted anyone to go.  Her dad went on the second night with her brother. She waved to me, had good eye contact, lots of smiles.

In the past she would ignore the fact you were there – if she allowed you to go to watch!

I went to my friends through the week to take a present for her little one. Faith entertained the little ones instead of being stuck to my side and after I finished my cup of coffee she took the cup through to the kitchen giving it to my friend’s husband and said “There you go Sean, thank you very much.”

My friend looked at me with shock and said “She would never have done that, she’s a different girl!!!”

Thursday was the end of school, and as a lovely round off to the term Faith got an award from school ‘ Star of the Term’. She was so pleased.

In Faith’s’s words ‘ I have had star of the week mam, but never a star of the term’. She shook the headmaster’s hand confidently.

Her school report has identified changes in Faith. She will now ask when unsure and tries her best. I am so proud of Faith and the journey she is making. Thank you for everything Viv.