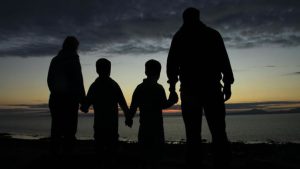 When our son was between 2 and 3 we noticed some differences between him and other children of the same age. Nothing too drastic but lots of little things were not developing at the rate at which we would have expected. Initially we put this down to children all developing at different rates, which of course is true.

Obvious things we noticed were delayed speech, difficulty in toilet training, switching off to instructions and no interest in becoming independent to dress himself etc. He found it difficult to sit at a table for meals and repeatedly wanted to stand up to eat. He also struggled with things that required co-ordination e.g. riding a bike, swinging etc. and whilst we can probably all pick out some of these things and say that it sounds like your son/daughter they together built up a picture of a little boy with a few developmental issues.

As our son got a little older these problems became more marked. Organising himself and listening to instructions became very difficult, however he was clearly a bright boy. We searched around for a name to give to his problem. We discounted autism because although there were some similarities he was also very tactile, soft, sensitive and loved being around people. Eventually, at age 5, school did an assessment and discreetly passed on the contact details for BrainChild run by Viv Hailwood. We booked an appointment and weren’t too sure what to expect. Coming from a Science background, we felt as though we needed to know that whatever was done had a scientific explanation. But for the benefit of our child we were prepared to give anything a go.

We arrived at Viv’s premises and straight away she set our son at ease. She explained to him that sometimes he found things difficult to do and that she was going to try and make things a little easier. He seemed relaxed and happy to oblige.

Viv did an initial assessment and very quickly told us accurately about the issues he would find difficult, before we told her, which I believe was very key to gaining success. She understood what was causing the problem. We embarked on the programme which consisted of a series of exercises that Viv turned into games, so my son enjoyed them and specific massage which was to be carried out each evening before bed. We went away having learnt how to do some massage on our son and began to build the exercises and massages into his daily routine. The massage does take a short while to do but it definitely pays off.

Within a week of starting, our son was dry at night. Many of the other improvements were gradual but definite. He began to organise himself, to sit at the table and use cutlery and not his fingers, to ride a bike and his speech became more fluent. Whilst these things may have come naturally anyway, I think that BrainChild helped the development along and somehow filled in a few gaps.

My son has just started Year 3 and whilst no doubt there are things he could improve on (as most children can) he is certainly holding his own. The teacher works well with us and gives him short chunks of information. He is getting himself dressed and organising his studies. He is very competent on a bike and enjoys taking part in a variety of different sports and is learning to play the piano. He is a popular kid and is accepted amongst his peers as one of them.

Had we not gone to Viv he could potentially have been a child left behind and victimised because of it.

Although our son’s problems were not drastic, I believe that going to BrainChild helped to make his development smoother and importantly our son never lost confidence because he thought he wasn’t quite as good or the same as some of the other children. Because of the age he was when we embarked on the scheme we feel we nipped the problem in the bud.

We are pleased to have been referred to Viv and would highly recommend her services.